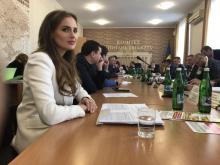 On March 21 the chairman of the Ukrainian Stock Breeders Association Iryna Palamar attended the meeting of the Budget Committee in the Verkhovna Rada, as the issue of limiting the amount of payments for all types of state support  determined in accordance with the Law of Ukraine "On State Support of Agriculture of Ukraine" was to be considered. Namely, within one fiscal year it is proposed to establish restrictions on state financing of UAH 150 million for one commodity producer and related persons.

This would eliminate the shortcomings of legislation that lead to irrational use of budgetary funds to support predominantly highly profitable livestock sectors and the largest enterprises, while less profitable sectors, small and medium-sized producers continue to fall. In turn, this leads to a weakening of the state's food security, a decrease in the export of livestock products and an increase in imports of similar products in Ukraine.

In addition, the introduction of the obligation of the producer of goods, which claims to receive state support, to provide the Ministry of Agrarian Policy with information about all the persons connected with it, that in the corresponding year receive such support, will make it more difficult for corruption schemes, according to which one agricultural commodity producer receives an inadequately large share (percentage) of the amount state support, while others receive minuscule.

However, despite the fact that the agrarians were waiting for consideration of this issue, for unknown reasons the people's deputies postponed its consideration. And not for the first time. The previous hearing was scheduled on March 14.

We hope that the Committee on Budget Issues of the Verkhovna Rada of Ukraine will nevertheless ensure prompt and transparent consideration of the issue of attracting relevant associations. We also recall that the problem of the opaque distribution of state subsidies in the sphere of the Ukrainian agro-industrial complex was sharply raised during the round table in the European Parliament, during which the European deputies supported the position of the USBA: last year's distribution schemes should be changed, because they contain signs of corruption, are dishonest and opaque.

The procedure for using funds to support livestock breeding requires detailed refinement, since it also did not take into account the opinion of profile organizations and the public, which in turn caused a wave of indignation among the agrarians, which began with the Agrarian meeting and the writing of an open letter to the Golos Ukraini newspaper to the Prime Minister and continued in the All-Ukrainian protest under the walls of the Cabinet. The agricultural producers voiced ten basic requirements, among which:

- Subsidy to producers of pork - 2 UAH per kilogram of live weight. In addition, the compensation of interest on loans for working capital of the operating enterprises of industrial pig breeding and cattle breeding;

- Affordable loans for stock breeders: a strict government demand for lending banks to pork producers, and livestock farmers without collateral;

The Ukrainian Stock Breeders Association will continue to defend its position and wait for the next meeting of the budget committee to appeal to people's deputies with a request to apply the function of parliamentary control and recommend to the government and the Ministry of Agrarian Policy to consider the package of proposals proposed by the USBA by finalizing the Decree of the Cabinet of Ministers of Ukraine No. 107 dated 07.02.2018.