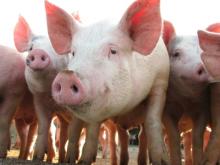 Since December 22, 2017 in Ukraine, 4 new cases of African swine fever has been recorded.

This is reported by the press service of the State Service of Ukraine for Food Safety and Consumer Protection.

So, at the ALLC FE "Druzhba" (Pokrovskyi district, Donetsk region) the death of pigs was registered.

Also, corpses of domestic pigs were found near the Troitske village of the Novoodeskyi district of Mykolaiv region. In all cases, the presence of the ASF virus was confirmed by laboratory tests.