In Ukraine there is no responsibility for the distribution of ASF 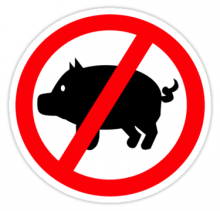 This is written by "UNN".

Experts noted that today, apart from the elimination of animals, the owner is not subject to any "sanctions".

"And if we are talking about an industrial producer, not everyone cares about establishing a biosafety system in conditions of increased epizootic risk."

As a rule, small businesses are becoming victims of ASF in Ukraine.

"Since 2012, about 40 farms have been hit by ASF, 80% of which are small businesses. To explain why they became victims of ASF is not difficult. They did not implement the necessary biosafety measures, and this is unacceptable in the current conditions. "

ASF is distributed in Ukraine since 2012. However, the problem of the lack of informality of the population due to illness remains urgent.

"The space for action is unlimited - starting from distributing materials (for the population, industrial producers and even representatives of competent veterinary bodies), ending with the organization of specialized events: simulation exercises, trainings, national and international conferences, farm audits," say experts.

It bears reminding that since 2016 in Ukraine only 77,838 pigs have been officially recycled. Most of all animals were destroyed in Khmelnytskyi region - almost 21,4 thousand animal units.