The FAO Food Price Index is an indicator of the change in the international price of a basket of food commodities per month. It is calculated on the basis of average values ​​of price indices for five commodity groups - cereals, vegetable oils, dairy products, meat and sugar - which are estimated taking into account the average share of each group in exports in 2002-2004. On May 3, another update of the indices came out, agronews.ua reports.

In April 2018, the average value of the FAO Food Price Index was 173.5 points, practically unchanged as of the March level, while it was 2.7% higher than the corresponding indicator of the previous year. In April, prices for most types of cereals and dairy products again showed growth, and sugar prices continued to decline. Prices in the vegetable oil and meat markets also show a downward trend. 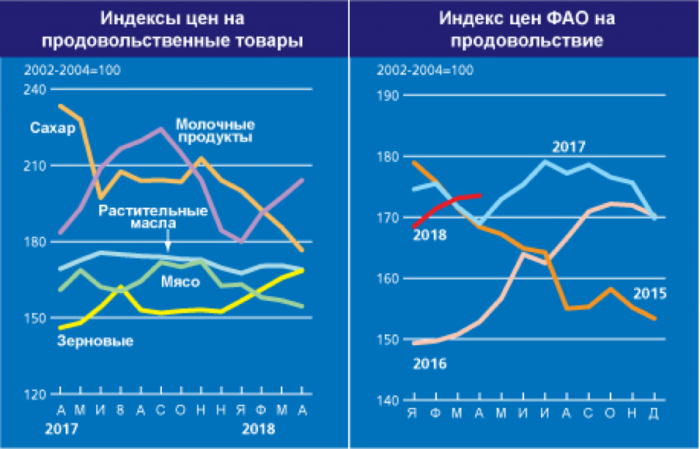 The average value of the FAO Price Index for cereals in April was 168.5 points, which is 1.7% (2.8 points) higher than the March level and almost 15.4% higher than in April 2017. The value of the index continues to grow for the fourth consecutive month due to the increase in prices for wheat, feed grain and rice, which has been observed in recent months. In the case of wheat, support for prices provides weather-related risks, especially in the United States, and active trade, while corn prices are rising amid expected decreases in crop areas in the United States and a drought-induced crop decline in Argentina. At the same time, the rise in rice prices is related to the next round of public procurement by Indonesia, as well as the announced by the Philippines a new state tender for import purchases of rice.

The average value of the FAO Price Index for vegetable oils in April was 154.6 points, which is 1.4% lower than the level of the previous month and is due to the conjuncture prevailing in the palm, soybean and sunflower oil markets. International quotes of palm oil, which has the greatest weighting factor in the compilation of this index, declined amid a slowdown in demand growth and the expected seasonal increase in production in South-East Asia. At the same time, the cost of soybean oil continued to decline due to high production levels in key producing countries. At the same time, in connection with the expected reduction in the export offer in the world, the prices for sunflower oil slightly increased.

The average value of the FAO Price Index for dairy products continued to increase for the third consecutive month, and in April it was 204.1 points, which is 6.7 points (3.4%) higher than the level of March. Thus, the value of the index was more than 11% higher than the level of April last year. The upward trend in prices is due to the steady import demand for all types of dairy products, as well as concerns over the market due to a possible reduction in the supply in New Zealand after a more significant than expected decline in milk production.

The average value of the FAO Price Index for meat was 169 points in April, decreasing by 1.6 points (0.9%) compared with a slightly revised March value. Thus, the value of the index was almost equal to the level it reached in April 2017. During this month, prices for beef and pork slightly decreased, while prices for mutton and poultry remained at a stable level. A significant increase in exports from North and South America led to a decrease in beef prices, and pork prices declined due to weak import demand.

The average value of the FAO Price Index for sugar was 176.6 points in April, which is 8.9 points (4.8%) lower compared to March's indicator and by as much as 24% lower compared to the level of April 2017. Reduction of quotations for sugar, which lasts from December last year, is largely due to the presence on the market of excess supply, especially given the record indicators in Thailand and India - the second largest sugar producer in the world. In addition, the depreciation of the Brazilian real against the US dollar and the measures to stimulate the export of sugar, which are expected to be taken by India and Pakistan, have also contributed to lower prices.