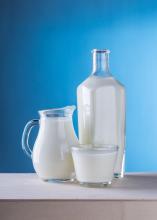 For the first time in a sufficiently long period, the world market of dry milk gives sellers reason for optimism. In any case, in the last two weeks, prices have not declined and some proposals have gone even with the price rising even on the "problem" market of the European dried skim milk, INFARGO reported.

In the EU, such a situation is explained by a decrease of the influence of intervention stocks. Considering the antiquity, they become less competitive in the market, especially since the European Commission is not ready to make concessions, which would correspond to the appropriate shelf life of the goods and the desire of potential buyers. For example, at the last tender, despite the demand for a record level of 91.9 thousand tons, the Commission agreed to sell only 24.1 thousand tons (though it is also record) at a price of 1051 EUR/ton.

At the same time, importers need to replenish stocks, and, stopping to wait, many of them are showing increasing interest in fresh product, especially on the eve of the Algerian tender.

The price conjuncture in the Oceania market for sellers also looks optimistic. The price level in the spot market has so far remained stable for dried skim milk and slightly increased for the dried whole milk. The situation should not deteriorate in the near future, in the first case - taking into account the trends in Europe and the growing dynamics of futures trading, in the second - due to improved demand against the background of a decline in supply.

Despite the high and growing supply, prices are also strengthening in the USA. This situation is not yet completely understood by the operators. It can be assumed that growth is related to the corresponding policy of sellers. Of course, without proper demand, it would also be difficult to adhere to such a strategy.