Ukrainian salo rose in price by 71% over the year 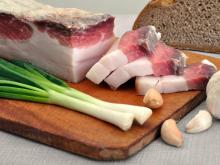 Experts of the Ukrainian Association of Trade Network Suppliers have investigated the rate of growth in the value of the "meat basket" of the Ukrainian over the year. Records on the increase in prices have salo and pork. This was reported by the chairman of the Association, Oleksii Doroshenko, on his Facebook page, UNN reported.

It bears reminding that among the reasons for the rise in price of pork and fat experts call the epidemic of African swine fever. With the disease and significant rates of its spread, the authorized state bodies of Ukraine cannot cope for the third year in a row. Consequently, the amount of imported pork and salo is growing.