Ukraine has passed the audit of the International Maritime Organization 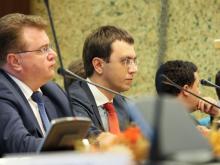 Ukraine has successfully passed an audit of the International Maritime Organization (IMO). This was stated by the Minister of Infrastructure Volodymyr Omelian on Monday, UNN reported with reference to the press service of the ministry.

"Ukraine has successfully passed the IMO audit ... Ukraine has confirmed its status as a naval power, and it is extremely important that the same is the assessment of our international partners, in particular, the International Maritime Organization. We have certain comments on the audit results, but among more than 50 countries, which also passed the IMO audit, the result of Ukraine can be considered exemplary. This is unequivocally the success of not only the maritime industry, but also of Ukraine as a whole," the minister said.

As noted, the IMO audit, the results of which were presented today, was held in Ukraine on June 11-18.

The purpose of the audit was to verify the compliance of Ukraine as a port state, the flag state and the coastal state with international obligations in the field of maritime safety.

"The IMO auditors congratulated Ukraine on the successful passing of the audit," is added in the ministry.