Traceability system: a means of protecting the consumer or a way of closing the market to private farms? 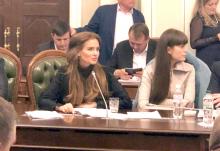 Today, at a meeting of the Agrarian Committee in the Verkhovna Rada, the deputies unanimously supported Bill No. 7489 of January 16, 2018 "On Amending Certain Legislative Acts of Ukraine Concerning Enhancing Measures to Ensure Traceability".

It provides for the introduction, as from January 1, 2020, of a ban on the use of meat and other slaughter products obtained as a result of slaughter not in a slaughterhouse that has an operational permit. The prohibition does not apply only to the case of own consumption of such products.

At the same time, the acting storage facility "On the basis of principles and requirements for safety and quality of food products" provides for the introduction of this prohibition from 1 January 2025 and allows the sale of meat in the agro-industrial market to the end user within 50 kilometers of the slaughter site or in the area in which it is implemented.

People's deputies Oleksandr Bakumenko and Petro Yurchyshyn, who reported on this bill, spoke very well of its advantages, delicately avoiding the issue of shortcomings. The main purpose of this document was to warn the spread of particularly dangerous animal diseases, as well as increase the responsibility of market operators to ensure traceability and food safety.

In addition, they did not say a word about that such approach will cause irreparable harm to the peasants, since the purchase of domestic meat will be banned. That is, in fact, Bill No. 7489 closes the market for selling meat to private households. It is offered to carry out slaughter of animals not independently, but on certified slaughter points. The prohibition does not apply only in the case of own consumption of such products. That is, in less than two years, Ukrainians will not be able to freely sell meat, which they themselves produced. So, the national product may disappear from our tables.

This situation appears not for the first time. The situation with meat is similar to the history with the introduction of new standards on the requirements for the quality of milk. This led to discontent among the population, the need to repeatedly postpone the introduction of EU standards (the abolition of the existing DSTU 3662-97 and the entry into force of the new DSTU 3662-2015) and government funding for the purchase of equipment through cooperatives.

Chairman of the Ukrainian Stock Breeders Association Iryna Palamar wanted to voice the existing threats to the adoption of this bill at the meeting of the agrarian committee, but the chairman of the committee Oleksandr Bakumenko did not give her a word, ignoring the raised hand.

Some people's deputies, who also share the opinion of the Association and have common sense, nevertheless managed to voice the need for amending Bill No. 7489, but this did not affect the final decision.

Finally, that the state systematically selects people's earning opportunities, and one must also take into account the fact that such trade is often the main and only means of surviving a peasant family. But nothing is offered in return. And as a result, private households are left with nothing.

Undoubtedly, such reforms should take place, but this must be preceded by a clear and well thought-out path of well-considered decisions on the part of the state. It is necessary to ensure the introduction of a certain adaptation period, during which a transparent mechanism for introducing the requirement for slaughtering animals will be developed. In addition, adequate funding must be provided. In particular, to build slaughtering points in each district. This will allow people to use such points within the limits of adequate territorial access, which in turn will reduce transportation costs. The slaughter points that will have an operational permit must meet all the requirements and standards according to their activities. Likewise, the procedure for issuing documents on slaughtering should be transparent and open.

Building a civilized European country, one always needs to remember the interests of people and work to ensure that innovative initiatives are as comfortable and desirable for society as possible, and a traceability system would be an effective means of protecting the consumer.