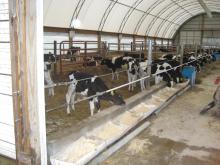 In 2017, the number of farms in Ukraine has grown by more than half a thousand.

"Positive statistics of the past year shows that the agrarian industry in Ukraine has begun to slowly reborn," says the chairman of the Ukrainian Stock Breeders Association Iryna Palamar. - For the past few years, it has only declined, and the number of agricultural enterprises has been decreasing. If we look at the data of the same statistics, as of the end of 2013, we had 49,132 farms, that is 9% more than today, and 11% more than in the past, as well as 2,223 agricultural cooperatives, that by 8% more than in 2018 and 11% more than a year ago.

As you can see, the Ukrainians began to understand that it is possible to earn money in their own country, on their land, and this is better than going to work for foreign plants. Now the most important thing is to support the good beginnings of our rural producers in every possible way.

In the state budget for 2018, 1 billion UAH is planned for a program to support small farms and agricultural cooperatives out of 4 billion allocated for animal husbandry. However, until now it is not entirely clear how and on what conditions the peasants will be able to receive these funds. Therefore, our Association appealed to the Ministry of Agrarian Policy to provide information on the activities in livestock, for which compensation is planned within the budget program for KPKRK 2801540 "State support of the livestock sector"; the time from which business entities can start seeking support, the mechanism for using funds, the criteria that applicants must meet.

Also at the end of last year, our Association joined the development of a comprehensive state program on the revival of the village and the cooperative movement, which will cover a whole range of issues relating to the revival of the Ukrainian village and the development of the agricultural cooperative movement: the development of veterinary affairs in the countryside, the provision of personal peasant farms with high-quality genetics cattle, which allows to produce more milk and increase profitability of production, support meat production (cattle fattening, reimbursement of the cost of milk for feeding calves, etc.), introduction of changes in the legislation on taxation, according to which income from membership in the cooperative would not be included in the aggregate income of the peasants and a number of other issues. "