Production of pork this year will decrease, salo will rise in price

Growth in the production of domestic pork can be expected only in 2019. However, this is not a forecast, it's only hope, writes in his Facebook Andrii Pankratov, an analyst of agricultural markets of FAO.

In 2018, opportunities to increase production, or at least a repeat of last year's result, are not seen in FAO. On the contrary, it is expected that the industry will take up as much as 6%.

"This means high prices, imports and continued changes in the structure of consumption in favor of chicken," - the expert explains.

According to him, cyclicity usually can be traced in the pig-breeding business. From three-four-year periodicity, production volumes, prices and investment activity in the sector are growing and falling. The cost of meat is also increasing - profitability is increasing, as a result - prices start to fall, the number of livestock is reduced, and so on. 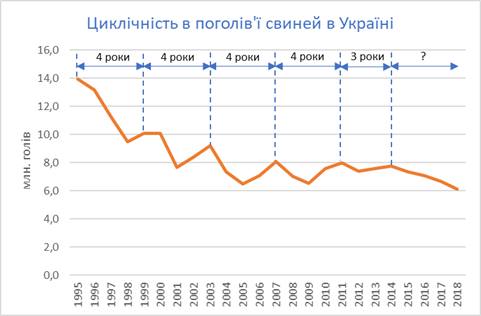 But what happens in practice? The peak of pigs in Ukraine fell in 2014. And we should have expected a new peak, but there is only a decline.

In the private sector, the situation is worse. At the beginning of March, the fall in livestock is estimated at 10%. In parallel with this, more and more imported tribal and commodity pigs from Europe. In the fourth quarter of 2017 alone, 5 thousand heads were imported, while in the three previous quarters - less than 3 thousand. In January-February 2018, imports have already reached almost 2 thousand heads and are likely to grow further.

The investment attractiveness of the sector is still low due to the ASF, says Pankratov. So, if at the end of this year we manage to catch up with last year's indicator of the number of pigs in agricultural enterprises, then the average annual number of livestock will be lower than last year. Last year's indicators of slaughter, too, will not be achieved, the expert predicts.