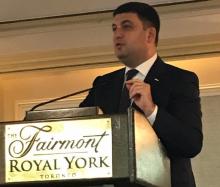 This became known on the results of the visit of the chairman of the Ukrainian Stock Breeders Association, Iryna Palamar, as part of the Ukrainian business delegation to the International Economic Forum Toronto Global Forum.

As Irina Palamar noted, during his speech at the above-mentioned forum Volodymyr Hroisman told about the Ukrainian reforms and noted that one of the priority directions of Ukraine's innovation activity in 2017-2021 will be, among others, the agro-industry. The prime minister reported that in the state budget for 2018, more than 2 billion UAH will be allocated to support livestock production, and another 1 billion UAH will be allocated to support farming and cooperatives.

"It is very good that the authorities are aware of the need for financial support for farmers, which they really need, especially private livestock producers," says Irina Palamar. - If today we do not support the association of communities, the cooperative movement, then in a few years the villages will simply disappear. We can only hope that the planned financing of animal husbandry will be preserved during consideration in the parliament, and that these funds will not settle in corrupt pockets, but will be allocated to those who really need them. "

It bears reminding that from October 30 to October 31, the Ukrainian business delegation headed by Prime Minister of Ukraine Volodymyr Hroisman took part in the trade mission at the International Economic Forum Toronto Global Forum.

Iryna Palamar, Chairman of the Ukrainian Stock Breeders Association, became part of the team that established trade and economic ties between business representatives. The delegation included representatives of ministries and departments, leading businessmen of the country.