An outbreak of the African plague was recorded in Mariupol 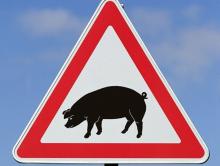 Pigs were killed on one of the subsidiary farms of Mariupol. This is reported by the General Directorate of the State Service of Ukraine for Food Safety and Consumer Protection in the Donetsk region.

In the study of selected samples of biomaterial in the Dnepropetrovsk Regional State Laboratory of Veterinary Medicine, a diagnosis was made - African swine fever.

"With a view to coordinating actions to localize and eliminate the disease outbreak, the meeting of the State Extraordinary Epizootic Committee of the Kramatorsk City Council was held, the decision of which approved the plan for the elimination of ASF, the borders of the epizootic focus, protection zones and surveillance," says the report. Now measures are being taken to localize and prevent the spread of the pathogen of ASF.