Opinion: Ukrainian milkmen should not rely on world markets 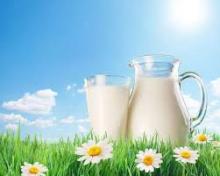 The Ukrainian milk index (UMI), which shows the conditional profitability of milk production by professional farms, for the first time since the beginning of the year demonstrated growth in July. This was reported by the economist of the Food and Agriculture Organization of the United Nations (FAO) Andrii Yarmak on his page on Facebook, agroportal.ua reported.

He also noted that the cumulative fall of UMI this year continued to be sharp over the past five years and reached 38.9%. At the same time manufacturers this year earned an average of 12.3% less than in the same period in 2017, but 7.1% less than the average for the last six years for the same period.

"If we compare the average indicators of the profits of milk producers after the loss of the Russian market with the current year, we continue to see a recovery in profitability - this year is still 7.5% more lucrative than the average figures for the previous three. Of course, it would be possible to work better, but export development takes time, and our processing is slower than desired, adapts to other markets," Andrii Yarmak noted.

He noted that in July the FAO global dairy price index fell by 14.1%, so a slight increase in UMI is a positive trend.

"In addition, the FAO global index in July 2018 was 8% lower than a year ago. However, only the prices of dairy products are taken into account in the global index, and we have prices for milk and feed costs. Therefore, the rest of the fall is the result of a rise in the cost of feed. As a rule, in August the UMI tends to grow. However, if we take into account the situation on the world market of milk, then there may be another result, because there predominantly predominate negative trends. But in September, the UMI is likely to start growing," the expert concluded.

At the same time according to Andrii Yarmak, while Ukrainian dairy producers should not rely on world markets because of a drop in prices on it.