Most of all Ukrainian milk is consumed by Moldovans 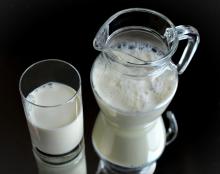 Moldova is the main consumer of Ukrainian milk. This conclusion can be drawn from the statistics of the State Fiscal Service of Ukraine for the 1st quarter of 2018, agroday.com.ua reported.

In monetary terms, dairy exports was $ 2.16 million, compared to $ 1.54 million a year earlier. Ukraine shipped $ 763,000 worth of milk to Moldova in the amount of more than 1.02 thousand tons. Further on, the list of major dairy importers is followed by Qatar (749 tons for $ 561 thousand) and Georgia (708 tons for $ 530 thousand). By the way, this year Qatar unexpectedly broke into the leaders in the consumption of Ukrainian milk and is ready to compete with Moldova.