In the Kharkiv region, border guards detained a truck with salo 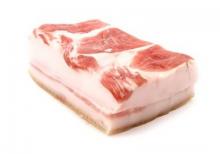 The car "Ural» loaded with salo was detained yesterday by the border guards of the Kharkiv detachment together with the employees of the Security Service of Ukraine.

This was reported by the press service of the State Border Service of Ukraine.

Information on the possible illegal movement across the border of consumer goods the border guards received from the SSU.

To implement it, a joint border squad was sent. During the patrolling of the possible violation of the border in the vicinity of the village of Chaikivka, 10 meters from the border, law enforcement officers found a truck "Ural".

The owner of the vehicle was not in it." While the car was being examined , 72 boxes of salo were found, the report said.

According to the press service, the car and goods were handed over to the employees of the SFS, and activities are continuing to find the owner of the car.