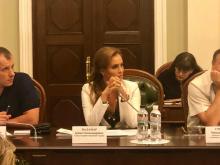 In addition, the head of the Ukrainian Stock Breeders Association expressed the need to introduce compartmentalization, prevent import of uncertified pesticides to Ukraine and raised the issue of providing farmers with grain cars and motive power. All proposals were supported by the head of the agrarian committee.

The round table was held with the participation of people's deputies of the Agrarian Committee of the Verkhovna Rada, representatives of the Ministry of Agrarian Policy, the State Service of Ukraine for Food Safety and Consumer Protection, profile public associations and industry associations, personally Mr. Christian Ben Hell, Head of the Agriculture Sector of the Delegation of the European Union in Ukraine.

One of the main issues raised by the USBA head was the problem of illegal takeover of agricultural enterprises and lands, which in Ukraine is gaining ground every day. "Agrarians have been waiting for an anti-illegal takover law for a very long time," Iryna Palamar said. - Therefore, the work of the Committee of the Verkhovna Rada on Agrarian Policy and Land Relations is a revision to the second reading and consideration of the draft Law "On Amendments to the Land Code of Ukraine and some other legislative acts to counter raid" No. 8121 of 14.03.2018, which was adopted in the first reading as a basis."

The second important issue raised by Iryna Palamar was the introduction of compartmentalization as the only way for pig producers to export their products under the ASF conditions. "This procedure is common in many countries around the world. It helps businesses to carry out international trade, provided certain epizootic diseases are present. The introduction of compartmentalization will help to invest in pig production and increase pork production."

The third problem, which Iryna Palamar spoke about in her speech, was the prevention and counteraction of importation into the territory of Ukraine and use of uncertified pesticides. "In Ukraine, the number of poisoning of farm animals is constantly increasing, and the fines for these violations are only 170 UAH. Therefore, it is necessary to develop a draft law on the prevention and counteracting the importation into Ukraine of uncertified pesticides and increasing liability for violation of this requirement," Iryna Palamar said.

The last question raised by the head of the USBA was the issue of providing agrarians with grain cars and motive power.

"As soon as the Committee starts working, the information form the Ministry of Infrastructure, the Ministry of Agrarian Policy and Food, and Ukrzaliznytsia OJSC should be heard about the provision of farmers with grain cars and motive power at the Committee meeting," Iryna Palamar said. - Because we want to understand what are Ukrzaliznytsya's plans for expanding the fleet of grain cars and modernizing them."

In response, the head of the Verkhovna Rada Committee on Agrarian Policy and Land Relations Oleksandr Bakumenko proposed together to demand a meeting with the Prime Minister to solve the problem with the cars, and also promised that the committee would hold a separate meeting on this issue.