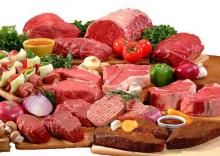 Exports of meat products in the first half of this year increased against January-June 2017 from $ 265 million to $ 304 million - more than 14%. This was reported by the deputy director of the National Scientific Center "Institute of Agrarian Economics" Mykola Puhachov, Ukrinform reported.

Positive shifts in the export of meat and by-products were achieved thanks to the continuing wide geographical diversification and consolidation in new sales markets after the loss of the Russian market. If in 2015 the position of the main importer of Ukrainian meat and by-products was held by Russia, then supplies to the markets of Europe and Asia have predominated since 2017.

Over six months of 2018 most of the products of this group - 21% - were purchased by the Netherlands, which last year for the first time topped the rating of importers of domestic meat. Significantly smaller purchases are made by Slovakia (9.6%), Iraq (8.2%), Belarus (7.7%), Germany (6.1%), Azerbaijan (5.5%) and Hong Kong (4.5%). Together these countries accumulate about 63% of exports of domestic meat products in monetary terms.

A characteristic feature of the first half of 2018 was the increase in the cost and volume of exports of poultry meat. The cost increased by almost a quarter – + 23% - from $ 196 million to $ 241 million with an increase in the export of poultry meat from 147 thousand tons to 152 thousand tons. According to forecasts of the Institute of Agrarian Economics, last year's trend to increase the volume of exports of this type of products will continue in 2018.