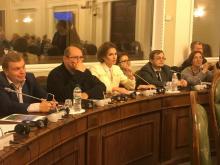 In countries with agrarian potential similar to Ukraine, agricultural cooperation is developing very powerfully, and plays an important economic role.

However, the reorganization carried out by combining several in one service was not effective, because the role of the veterinary service, veterinarians and phytosanitary was reduced, which led to a decrease in control over the quality and safety of products, various epizootics, in particular, ASF. There is a lack of veterinary services in the field and coordination with them of the State Service of Ukraine for Food Safety and Consumer Protection.

Another topic, which Iryna Palamar spoke about in her speech, was a number of proposals on adaptation of Ukrainian legislation in the field of agricultural cooperation with EU legislation.
In particular, the speaker noted that in countries with a similar agrarian potential agricultural cooperation is developing very powerfully and plays an important economic role: it is a path to the development of both agricultural production and rural areas, the solution of employment and income issues in the countryside.

Turning to international statistics, to date, there are more than 700,000 cooperatives in the world, which include 120 activities and unite about 800 million of the world's adult population. In particular, 63% of cooperatives are in Asia, 22% in Europe, 13% in America and 2% in Africa. The main advantage of European cooperatives is the offer of environmentally friendly products.

The speaker drew attention to the fact that in Ukraine there are already 2 registered draft laws on agricultural cooperation (No. 6527 and No. 6527-1). In the bill number 6527, article 30, part 2 it is said that the implementation of cooperative education is imposed on the management of the agricultural cooperative. Nevertheless, such a norm does not correspond to the spirit of European legislation.
In addition, nothing new is proposed for state support of cooperation in the bill number 6527, which differs from what was already prescribed in the current Law "On Agricultural Cooperation".

Also in her speech, Iryna Palamar also spoke about the need to determine the legal basis for the functioning of the biomethane market at the legislative level, that is, to create a separate law on the biomethane market or supplement the relevant clauses with a general law on the gas market (the Law of Ukraine "On the natural gas market" edition).
"Developed countries of the world have long been using" green "energy, - says Iryna Palamar. - Agricultural waste is an excellent source of raw materials for biogas plants. Thanks to the processing of waste on biogas plants, enterprises and the state will be able not only to care for the environment, but also to earn by selling biogas as an alternative to expensive natural gas. However, to implement such innovations, it is necessary to adapt Ukrainian legislation to EU norms in the field of utilization and utilization of agricultural wastes, stimulation of biogas plants construction, production and use of biomethane. "

"The meeting raised extremely important aspects of the adaptation of Ukrainian legislation to EU legislation in the agrosphere. In all civilized world, legislation in the agrarian sphere presupposes state support of producers and proper sanitary and epidemiological control. Of course, there is still a lot of work ahead, and our public organizations once with other members of the Verkhovna Rada Committee on Agrarian Policy and Land Relations and the Verkhovna Rada Committee on European Integration will continue to work actively in this direction, " notes Iryna Palamar.