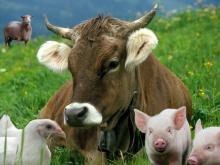 Today, most cattle are owned by the population - almost 66%, and only 34% are agricultural enterprises. This is a deterrent to the production and export of high-quality beef.

This is a deterrent to the production and export of high-quality beef. In order to develop the livestock sector in Ukraine, it is necessary to work on its new structure. This was stated by the Deputy Minister of Agrarian Policy and Food of Ukraine on issues of European integration Olha Trofimtseva during the "Ukrainian beef congress" within the framework of the exhibition Ukrainian Food Expo.

"Today, for us, the development of livestock in Ukraine is one of the priority areas. Therefore, in the Draft Law of Ukraine "On the State Budget of Ukraine for 2018" the Ministry of Agrarian Policy envisages UAH 2.3 billion for state support of this sector. However, the development of the industry should be comprehensive. It is necessary to create a base for supporting long-term projects, since the fattening sector of cattle and beef production is not an investment of one year of payback. In addition, the purchase and sale of calves and young cattle in the population, which prevails today in Ukraine, is not the optimal form of business for the livestock sector, " notes Olha Trofimtseva.

She added that support would be directed to three key areas: cheaper cost of building or reconstruction of livestock farms and complexes, cheaper loans for such construction and development of genetics and breeding business.

"For 9 months of 2017, the export of Ukrainian frozen beef increased 1.9 times and amounted to 21.6 thousand tons. The export of Ukrainian live cattle has also significantly increased. This indicator reached 51 thousand Goals over the past year, while Azerbaijan and Egypt became the main importers. At the same time, unfortunately, we are almost not present in the sector of chilled beef, which is the most attractive in terms of exports. Today, together with our colleagues from international organizations such as FAO, IFC, EBRD and the World Bank, we are developing concrete projects in the field of fattening cattle, " notes Olha Trofimtseva.

According to her, the priority markets for the development of beef exports today are the countries of the Near and Middle East, the countries of Asia and others. Now the form of a veterinary certificate for the export of Ukrainian frozen beef to the People's Republic of China is being worked out between the State Food Service and the competent authorities of the People's Republic of China (AQSIQ).

In addition, a process has begun to obtain a permit to supply red meat to the markets of KSA, Israel, and Indonesia. "Exports of beef can become a mechanism for launching the industry as a whole, despite the weak domestic market," sums up the Deputy Minister.