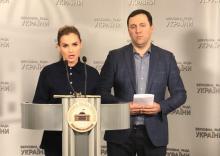 The chairman of the Ukrainian Stock Breeders Association Iryna Palamar together with the People's Deputy of Ukraine Viktor Krivenko spoke at a briefing in the Verkhovna Rada of Ukraine, where she noted the need for a detailed revision of the Procedure for using livestock resources, which, in the current version, is not aimed at protecting the interests of agricultural producers, but, on the contrary, is aimed at their liquidation.

On March 22, 2018 the chairman of the Ukrainian Stock Breeders Association, Iryna Palamar, together with People's Deputy of Ukraine Viktor Krivenko spoke at a briefing in the lobby of the Verkhovna Rada of Ukraine. The Chairman of the Association confirmed the need for a detailed refinement of the Procedure for the use of livestock support funds approved by the Decree of the CMU No.107 of 07.02.2018. The text of this document is not aimed at protecting the interests of agricultural producers, but, on the contrary, is aimed at their liquidation.

Viktor Krivenko supported the position of the Ukrainian Stock Breeders Association and said that only large agroholdings will receive budgetary funds, while medium and small ones receive nothing.

Iryna Palamar noted the danger of further cutting out the number of livestock by 10-15% and drew the attention of those present to the fact that the opinion of profile organizations and the public was not taken into account when adopting the Order; it did not receive proper discussion in public. This led to a mass wave of indignation among the agrarians, which was voiced at the Agrarian meeting and in an open letter to the Prime Minister in the Golos Ukraini newspaper, and then continued during the All-Ukrainian protest under the walls of the Cabinet.

The chairman of the Ukrainian Stock Breeders Association voiced the demands of agricultural producers:

In addition, Iryna Palamar reminded the audience that the problem of the nontransparent distribution of state subsidies in the sphere of the Ukrainian agribusiness was discussed during a round table in the European Parliament, where the European deputies supported the same position advocated by the USBA. They believe that there are signs of corruption in the distribution schemes of state subsidies.

Finally, Iryna Palamar appealed to people's deputies with a request to apply the function of parliamentary control and recommend to the government and the Ministry of Agrarian Policy to take into account the package of proposals proposed by the Ukrainian Stock Breeders Association.