ASF was not found in the unauthorized burial of pigs 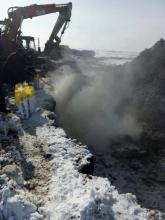 The State Service for Food Safety and Consumer Protection of Bucovina informs that the epizootic situation in the Lukovytsia village is under control and unauthorized burial of animal corpses is eliminated.

On February 16, 2018, Hlybotskyi district department of the Main Directorate of the State Service for Food Safety and Consumer Protection in the Chernivtsi region received a message from the chairman of the Lukovytsia village council of the Hlybotskyi district about the unauthorized disposal of the corpses of pigs on the field (at a distance of about 1 km from the settlement) beyond the Lukovytsia village. On the same day after the departure of a group of specialists from the regional and district directorates of the State Procurement Service, representatives of the Hlybotskyi district state administration, it was established that the field had recently been excavated with digging deep holes.

To study this situation, on February 16, 2018, a meeting of the Technological and Environmental Safety and Emergency Situations Commission was convened at the Hlybotskyi Regional State Administration at which a decision was made to dig out the corpses of pigs for the selection of the patomaterial for the purpose of laboratory testing for the presence of an ASF pathogen (Protocol No. 5 of 16.02.2018). An appeal was also sent to the Hlybotskyi police department of the Storozhynetskyi PD MDNP in the Chernivtsi region with an urgent request to conduct an investigation into the creation of an unauthorized burial of animals.

On the same day, after the digging out, material was taken from two corpses of pigs and sent to the STATE RESEARCH INSTITUTE FOR LABORATORY DIAGNOSTICS AND VETERINARY-SANITARY EXPERTISE in Kyiv.

Also, the State Service for Food Safety and Consumer Protection specialists conducted measures for disinfection of equipment, equipment, and places where excavations were carried out. A disinformation was also made, through which the residents passed through. Bulb and inspectors who were present during the excavations.
On February 17, 2018 a negative result was obtained on ASF (report on the results of the study of pathological (biological) material No. 001452 p.m \ 18 from 17

Subsequently, using 8 trucks, the biomaterial together with the soil was transported to the Eurosvinka facility, located between Tsuren village and Ostrytsia village of the Hertsaivskyi district of the Chernivtsi region, where it spent several days in trucks before making a decision on the reburial, with observance of all necessary sanitary standards.

On February 19, 2018, a meeting of the State Emergency Antiepizootic Commission was held at the Hertsaivskyi district state administration, where it was decided to bury the excavated corpses of pigs and seized soil in the Ostrytsia village council of the Hertsaivskyi district of the Chernivtsi region (the general protocol of the extraordinary meeting of the Technological and Environmental Safety and Emergency Situations Commission and the State Emergency Antiepizootic Commission in Hertsaivskyi District No. 1 as of February 19, .2018).

On February 20, 2018, according to the decision of the meeting of the above-mentioned commissions, the soil and remains of animal corpses were buried at a distance of more than 1 thousand meters from settlements to a depth of more than 2.5 meters in a mixture with chloric lime. The vehicles used in this (cars, tractors, loaders) were washed and disinfected under the supervision of the Main Department of the State Service for Food Safety and Consumer Protection and with the participation of the representatives of the Ostrytsia village council, residents of Ostrytsia village.