Volodymyr Groysman will not allow the sale of Ukrainian land 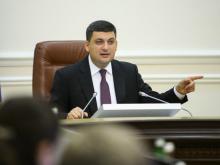 Prime Minister Volodymyr Groysman does not intend to serve large landowners in the preparation of land reform, which will allow buying and selling agricultural land. He stated this during an hour of questions to the government in the Verkhovna Rada, agropolit.com reported.

"There will not be my initiative. I will not allow the sale of Ukrainian land. I can allow only that the Ukrainian farmer has an opportunity to buy and sell this land in a limited amount, but not a foreign farmer. I will not serve any large landowners," Volodymyr Groysman said.