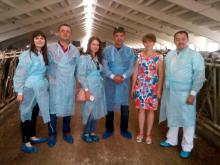 The Ukrainian Stock Breeders Association organized a trip to the advanced Ukrainian farms for breeding cattle for the delegation from Uzbekistan, that wants to buy Ukrainian heifers.

From August 6 to 9, 2018 a delegation from the Republic of Uzbekistan, including representatives of livestock business and industry experts, visited advanced Ukrainian cattle-breeding enterprises to get acquainted with the working conditions of farms, their sanitary-veterinary level, production indicators, etc.

The trip for the Uzbek livestock breeders was organized and conducted by specialists of the Ukrainian Stock Breeders Association (the USBA).

It bears reminding that the USBA within the framework of development of export relations of livestock products (one of the priorities of the work of the USBA) has been fruitfully working over the past year towards establishing cooperation with the Republic of Uzbekistan.

«Uzbekistan has demonstrated the most significant growth in milk production in the entire post-Soviet space - more than 2 times over the past 15 years. Today the cattle stock consists of 12 240.1 thousand heads, - Iryna Palamar, the head of the USBA, noted. – As of today, a number of programs have been adopted there to support the livestock sector, thanks to which it has already succeeded in significantly increasing the number of cattle. However, they want to continue to develop. Today the Uzbek side is interested in developing the genetic potential of cattle in the country, so from this point of view they are interested in Ukraine as a state where there is already a good advanced genetics, which is bred on our breeding farms».

It bears reminding that on this issue during the last year the experts of the Association and its head Iryna Palamar held a series of meetings with representatives of the authorities, industry associations, producers of livestock products of the Republic of Uzbekistan. In addition, the head of the USBA carried out a business trip to Uzbekistan at the personal invitation of the country's ambassador, Mr. Abdualiyev Alisher Khabibullayevych. Then the parties discussed the possibility of attracting investments in Ukraine, establishing business ties between the Ukrainian and Uzbek businesses, implementing joint business projects in livestock.

Thus, the visit of the Uzbek delegation to Ukraine was the next step in realizing the establishment of business Ukrainian-Uzbek relations in the direction of stock breeding.

During the trip representatives of livestock business and industry experts visited advanced farms for breeding cattle in different regions of Ukraine.

«Uzbek livestock keepers were interested in the conditions in which the heifers are kept, the technologies of feeding, the characteristic diseases of representatives of this or that genetics and their productivity, which is expressed in terms of milk yields, Iryna Palamar, head of the USBA, commented. - And it was evident that all members of the delegation were very satisfied with the high level of farm work, their sanitary-veterinary well-being, the quality of the heifers themselves, the conditions of their maintenance and genetic potential».

Thus, according to the results of the trip, an agreement was reached that deliveries of heifers from Ukraine to Uzbekistan will begin very soon with the assistance of the USBA.