The Ukrainian Stock Breeders Association calls to adopt bill No. 8121, which is designed to solve the problem of agrarian raiding in Ukraine 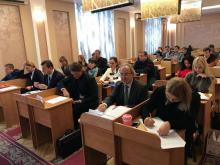 During the period from the 15th of July to the 15th of November 2017 the anti-raider headquarters received 500 complaints, 130 of which were with signs of raiding, 17 criminal cases were initiated. This was said by Olena Sukmanova, the Deputy Minister of Justice for State Registration in an exclusive interview with AgroRolit.com.

In connection with the fact that in Ukraine there is a serious problem with agrarian raiding, it is very important to finally adopt a special law, which is intended to change the situation for the better. We are talking about draft law No. 8121 of March 22, 2018 "On Amending the Land Code of Ukraine and some other legislative acts to counter raid". The Ukrainian Stock Breeders Association supports the bill and calls for its adoption.

It bears reminding that the Ukrainian Stock Breeders Association participated in the meetings of the Working Group of the Committee of the Verkhovna Rada of Ukraine on Agrarian Policy and Land Relations, who worked on the development of the draft Law of Ukraine on protection of property rights of owners and users of land, prevent the illegal acquisition and takeover of companies in the agricultural sector economy.