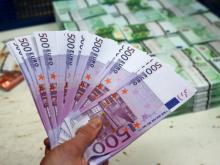 The new tranche of the EU can be canceled because of the scandal surrounding Ukrainian state subsidies in the agro-industrial complex. This is reported by "Novoe Vremia".

It bears reminding that European Commission approved the proposal for a new program of macro-financial assistance (MFA) for Ukraine in the amount of 1 billion euros to support economic stabilization and structural reforms in two tranches.

The report says that on March 7 in the European Parliament a round table was held where the deputies Fulvio Martustcello and Alberto Sirio initiated a discussion on the issue of non-transparency of distribution of state subsidies in the Ukrainian agro-industrial complex. European Parliament deputies believe that there are signs of corruption in the distribution scheme, and this could negatively affect the allocation of a new EU tranche to Ukraine.

"In a limited budget, it would be logical to subsidize those market participants who most need state support, but we see that 35% of the state subsidies of the entire Ukrainian agribusiness were distributed in favor of one of the largest agricultural holdings of the country - the industrial monopolist MHP, which produces chicken meat and has the highest profitability in the industry. The main shareholder of the company is included in the Forbes rating of the richest people in the world, while in the Ukrainian agricultural sector there are tens of thousands of small and medium-sized farming enterprises, which are really in desperate need of help, including the enterprises of the grain sector, which have not been included in the list of subsidized areas, " notes Alberto Sirio.

If in the coming months the proposal of the European Commission on granting a tranche to Ukraine will be approved by the European Parliament and the Council of Europe, the first tranche of the state will be available in July-September 2018.