Ukraine increased the export of margarine products by 37% 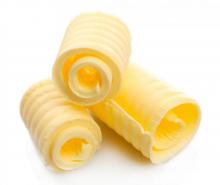 According to official statistics, during the first two months of 2017/18 MY (September-October) Ukraine exported 11.6 thousand tons of margarine products, which exceeded the results of the same period of the season earlier (by 8,500 tons) by 37%.

This was reported by APK-Inform.
At the same time, the largest buyers of Ukrainian products during the reporting period were Belarus - 23% of total exports, Moldova - 12%, Romania - 11% and Georgia - 9%.