Ukraine in 2025 can increase the number of dairy cows to 2.76 million 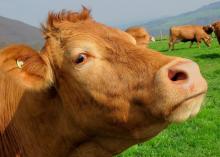 The strategic goal of the agro-industrial complex of Ukraine for the coming years is to stabilize and increase production of livestock products, in particular the state can increase the number of dairy cows to 2.76 million until 2025. This opinion was expressed by the president of the National Academy of Agrarian Sciences of Ukraine Yaroslav Hadzalo during the meeting on innovative development of animal husbandry in market conditions, which was held in Vinnytsia region, the press service of the Academy reports.

Yaroslav Hadzalo gave an example: over almost 30 years the number of cows in Ukraine has decreased by 4 times, pigs – by 2.9 times, sheep and goats -  by more than 6 times. The lion's share of livestock production has so far fallen to the households of the population. It is here that 70% of the total volume of milk is produced, 49% of the pigs and 74% of the sheep are kept.

"This situation in the industry causes an insufficient level of production per capita, as well as too high a share of poultry meat in its overall structure," adds the president of the National Academy of Sciences.

In his opinion, the Strategy for the development of agricultural production in Ukraine for the period until 2025 should solve the problem. It provides for an increase in the productivity of animals, in particular, the average milk yield per cow is about 6 thousand kg, and in agricultural enterprises it is up to 7-7,5 thousand kg of milk. The number of dairy cows in this period should be increased to 2.76 million heads. To achieve these indicators it is planned at the expense of its own reproduction, the purchase of heifer calfs from the population and the import of high-performance heifers.

"We are working to establish cooperation between the experienced farms of the Academy and all participants in the producer-processor-consumer chain. Research institutions with their experimental bases can become hotbeds of modern management in animal husbandry, provide technological services and breeding material, provide training in recreating, Feeding, livestock maintenance and evaluation of product quality will ensure the processing enterprises the necessary volume of quality products for which producers will have to get fair money, "- said Yaroslav Hadzalo.