Trade turnover between Ukraine and Bangladesh demonstrates an upward trend 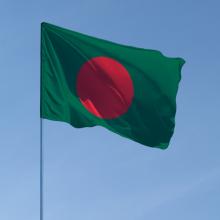 Bangladesh is in the TOP-10 buyers of Ukrainian wheat and other cereals, and, according to the State Statistics Committee, commodity turnover between countries has an upward trend.

This was stated by the director of Daniel Trading SA Olena Neroba.

Therefore, according to the expert, the level of corruption in Bangladesh all the time surprises even experienced Ukrainian traders, and there is also a regional peculiarity of delaying payment for the delivered products.

"The situation is not saved even by trade with the condition of opening a letter of credit, as this leads to a rise in the price of goods, and Ukraine is breathing in the back of its competitors. In addition, cases of unfair play on the quality of the supplied products, especially in the part of vegetable oil, have become more frequent. In pursuit of a competitive price, such producers and suppliers not only negatively affect Ukraine's reputation, but also create barriers to trade in goods that comply with all quality standards. In addition, there are technical difficulties, among which are shallow water areas of ports and a low rate of unloading, which negatively affects the freight cost, " says Neroba.

The expert also noted that Ukraine is a supplier of fodder for Bangladesh, and high-protein grain has traditionally been imported from India, Russia, Australia and Canada for two reasons: firstly, territorial proximity, and secondly, insufficient supply of food grain in Ukraine.

"The exception was 2017/18 MY, when the weather again adjusted the traditional geography of purchases. At the same time, Bangladesh remains one of the priority countries for Ukraine. Population growth stimulates demand for food and forage crops. Ukrainian producers and traders hope to stimulate the development of relations at the state level, although they do not leave any attempts to enter new niches of the Bangladesh market either independently or with the support of profile associations, " sums up Neroba.