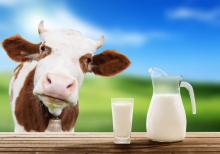 The processors switch massively to raw materials, which produce farms, instead of milk, which the population gives away.

This is reported by Infagro.

Milk produced in agricultural enterprises is of higher quality than that produced in private households. There is no such sharp seasonality in milk from farms, and the difference in price (on average for the year) is not so noticeable as it was before.

In the second half of October, the prices for quality raw materials produced by the Ukrainian agricultural enterprises have started from 9 UAH / kg, the value of milk of large volumes exceeds 10 UAH / kg, the average estimated price is 9.7 UAH / kg.

On average, the milk produced in Ukraine costs 5-6 UAH / kg, which, taking into account procurement and logistics costs, is 7-8 UAH / kg.

In connection with the decline in export activity in the commodity market, the supply of wholesale volumes increased.

According to experts, in November, you should not expect an increase in purchasing value, at least in the first days of the month.