One soup will cost 11 UAH, but experts promise the reduction of the cost because of cheap vegetables. 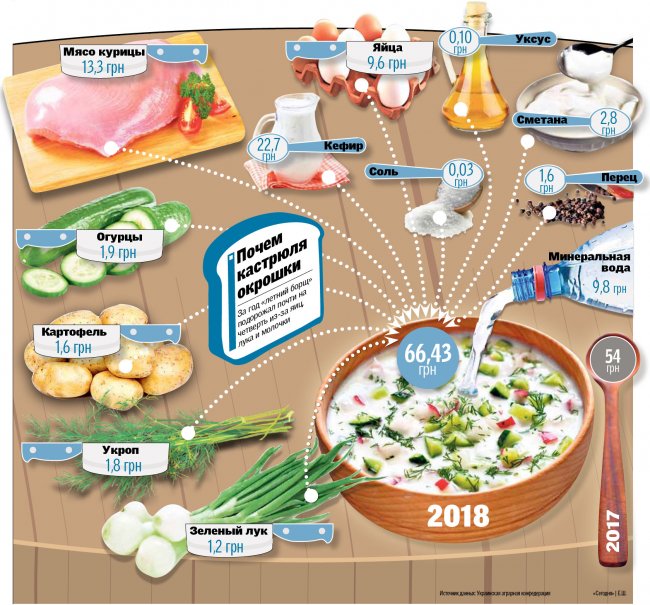 Over the year eggs rose in price the most - by 89.7%. If in 2017 the dozen of eggs could be bought for 12.7 UAH, now it costs 24.1 UAH. The main reason is that our producers started exporting eggs to the EU, where their cost is much higher than in Ukraine, which influenced the level of domestic prices. On the second place is green onion, its value over the year increased by 78% - up to 40 UAH/kg. We also have an annual rise in price of dairy products - sour cream (+ 27%) and kefir (+ 24.4%). The increase in milk prices was influenced by an increase in the cost of feed for livestock, a reduction in milk production, and an increase in the incomes of the population. The price of chicken rose by 21.7%. Kg of chicken carcass costs 53-54 UAH. Also, mineral water has risen by 14.7%, dill by 14.3%. The price was slightly restrained for cucumbers (-38%) and potatoes (-23.5%).

By the end of the summer the okroshka (cold vegetable soup) will become more accessible - a traditional decline in prices for vegetables is expected. However, in the cost of the final product they are less than 10%, so the price of the dish will be not very much affected - minus 2-3 UAH. Nevertheless, kefir is more expensive product (34.2%), chicken meat (20%) and mineral water (14.7%), in the amount of almost 69%, it is unlikely to be cheaper. The director of the Association of suppliers of trade networks Oleksii Doroshenko agrees with the fact that meat and milk are unlikely to fall in price. But, according to his forecast, the demand for them in the summer is reduced, and the storage time due to the heat is reduced too.