The number of slaughterhouses in two years decreased by almost 10% 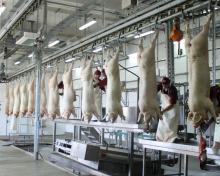 In Ukraine the number of meat processing enterprises that carry out slaughter of farm animals has been systematically declining for the third consecutive year.

Such data was received by the Ukrainian Stock Breeders Association from the State Statistics Service in response to their request, by letter of May 3, 2018 No. 15.2-20/766.

At the same time, as is known, the state introduces new requirements for slaughtering animals (draft No. 7489 of the Law of Ukraine "On Amending Certain Legislative Acts of Ukraine Concerning Enhancing Measures to Ensure Traceability"), according to which meat of animals slaughtered not by specialized slaughter points , already as of 2020, it will be impossible to sell for sale, but it is allowed only for own consumption.

Thus, the situation is twofold: on the one hand, the state requires only animals to be slaughtered at specialized slaughter stations, on the other; their already small number in Ukraine is declining.

The Ukrainian Stock Breeders Association studied the situation of the network of slaughter stations operating in Ukraine. Representatives of medium and small businesses, who communicated with the specialists of the USBA, noted a huge problem with the activities of slaughterhouses in Ukraine. Some of them are generally "frozen" and do not work. The other part is in an inadequate state. Slaughterhouse items that meet high sanitary and epidemiological standards, often in some regions are in a very small number. In addition, they are territorially removed. Moreover, to carry the animal to the slaughterhouse in 100 km for a peasant, of course, it is completely unprofitable.

That is why the state today simply needs to pay attention to this problem. Of course, the primary goal of introducing these innovations is quite positive - the regulation of the epizootic situation in the country, the approach of Ukraine to the world requirements for quality and safety of products. After all, if we want Ukraine to be competitive in the world meat market, we must produce high-quality products, and adhere to European standards for its cultivation, slaughter, etc. Therefore, the Ukrainian Stock Breeders Association supports the introduction of the best world practices in Ukraine, but it is reasonable, with minimal damage to national interests and food security.

Nevertheless, before introducing a ban on the sale of meat of animals slaughtered not in the special center, it is necessary to develop a wide network of slaughterers available in every locality in Ukraine. A special state program for the development of livestock and the meat industry must be adopted.

The creation of a wide network of slaughterers will solve not only the issue of controlling the epizootic situation in the country, moving and selling meat inside the country for the owners of subsidiary farms. This step will help exporters who can sell meat not alive, but in a processed form, getting more for it as a product with added value.

It should be recalled that in the export strategy adopted by the Government of Ukraine (the "road map” for strategic development of trade) for 2017-2021 it was noted that, having important importance for the economy, Ukrainian exports consist mainly of raw materials, which indicates inefficient use of resources. The greatest prospects in the food and processing industry for export are finished food products; food ingredients, in particular, products of deep processing; organic products manufactured in compliance with established rules.

Therefore, the Ukrainian Stock Breeders Association calls for ensuring a certain adaptation period, during which a transparent mechanism for introducing requirements for slaughtering animals will be developed. The state should offer a clear plan for providing persons engaged in agriculture with slaughter points, and conduct awareness-raising activities among the population. In addition, adequate funding is needed to build animal slaughter points in each district. In particular, to provide tax incentives, to attract loans, etc. Slaughter points, which will have an operational permit, must meet all the requirements and standards, according to their activities. Likewise, the procedure for issuing documents on slaughtering should be transparent and open, and then the peasants themselves will be interested in the construction of slaughterers in their settlements.