New cases of ASF in Donetsk, Mykolaiv and Chernihiv regions 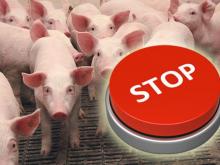 In Ukraine, new cases of African swine fever were recorded.

This is reported by the press service of the State Service of Ukraine for Food Safety and Consumer Protection.
So, on the territory of the hunting grounds of the Petrivka village council between Petrivka village and Kyrylivka  village (Volnovaskyi district, Donetsk region) two corpses of domestic pigs were found.

Also in the Mykolayiv region, diseases and cases of pigs were registered in the personal subsidiary farm of a citizen in the city of Nova Odesa.

In addition, on 21.02.2018 on the territory of the hunting grounds of the LLC "Ichnia" near the Yuzhne village (Ichnianskyi district, Chernihiv region) three corpses of wild boars were found.

In all cases, the DNA of the African plague virus was detected during laboratory tests. In the foci of the disease, measures are taken to localize and prevent the spread of the pathogen of ASF.