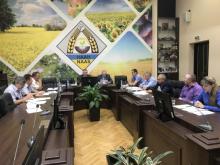 The National Academy of Agrarian Sciences of Ukraine has developed a draft of a new Instruction on the prevention and control of African swine fever. The project was considered during the workshop under the chairmanship of the first vice-president of the NAAS Mykhailo Hladii. This was reported by the press service of the National Academy of Sciences.

"This is a typical document that determines the order of preventive measures for the prevention of animal diseases, veterinary and sanitary measures in case of emergence of ASF and is mandatory for farms of all forms of ownership,"  Mykhailo Hladii noted.