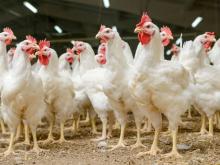 As a result of unsustainable policy of state financial support in 2017, representatives of the poultry industry received unreasonable competitive advantages.

At the same time, they used the resources of state support from several, sometimes mutually exclusive sources, noted the head of the department of financial and credit and tax policy of the National Research Center "Institute of Agrarian Economics", Ph.D. Leonid Tulush, commenting on the results of the fiscal management of the development of agro-industrial production last year.

On the one hand, he noted that poultry enterprises were able to fully use the resources of the new direction of support "Budgetary subsidy for the development of certain types of agricultural products" of the budget program "Financial support for agricultural producers", which accounted for the lion's share of state financial support resources. This direction of support was a kind of compensator for the finally abolished special regime of VAT in 2017.

At the same time, the share of "reserved" budget resources for poultry enterprises is 50% of the allocated under the program 4 billion UAH that was clearly overstated, the expert stressed. After all, according to the calculations of scientists of the Institute of Agrarian Economics, in 2016 the share of poultry enterprises in incomes from growing subsidized agricultural products was about 45%. Approximately the same amount was the share of the VAT-accumulation sum for poultry products in the total amount of VAT-accumulation from the implementation of all subsidized - in accordance with paragraph 16-1.3 of Article 16-1 of the Law of Ukraine "On State Support of Agriculture of Ukraine" of 24.06.2004 No. 1877-IV - types of activity in 2015, when the special regime of accumulation of VAT amounts was still fully functioning.

Consequently, the level of return of VAT amounts paid from the running of subsidized VAT in the form of budget subsidies in the quasi-accumulation of VAT for poultry enterprises was higher every month than for other agricultural enterprises - recipients of such budgetary subsidies, Leonid Tulush noted.
In addition, the formula for the distribution of budgetary subsidies in certain areas, as defined in item 10 of the

Procedure, approved by Resolution of the Cabinet of Ministers of 08.02.2017 No. 83, was formed in such a way that the share of poultry enterprises in the total volume of subsidies paid in fact amounted to almost 2 percentage points more than the established standard - due to redistribution of unused balances of grants of previous months, the scientist said.

In addition, he noted, the advantages of poultry enterprises were also in the specificity of their activities, namely, the rhythm of shipment of products during the year. As a result, a significant number of poultry enterprises participated in no less than nine distributions of budget subsidies. At the same time, almost 35% of the participants in this support program received no more than two grants (!).

In general, in 2017, according to the budget program "Financial Support for Agricultural Producers", poultry enterprises received more than 2.07 billion UAH of state support, which is almost 5% of the total level of their income from the sale of poultry products, Leonid Tulush noted.

It should also be taken into account that exporters of poultry products are usually the structures associated with poultry producers that in 2017 were able to take advantage of the opportunity to obtain export budget refund of VAT. At the same time, payment of budgetary subsidies in the mode of accumulation of VAT was introduced only for industries oriented to the domestic market, the share of exports of which relative to production volumes is insignificant, the expert stressed.

However, the volume of exports, particularly of poultry meat, has increased significantly in recent years, the expert said. In 2017, they exceeded the figures of the previous year by 13% and amounted to more than 272 thousand tons. In terms of value, exports of this type of livestock products increased from $ 292.5 million in 2016 to $ 390 million in 2017.

Deliveries to foreign markets of almost a quarter of poultry meat produced in Ukraine necessitated the recovery from the budget of export VAT of more than 1.5 billion UAH. Most of this amount is direct budgetary losses, since the bulk of paid poultry enterprises VAT in the budget has already been returned to them in the form of a budget subsidy in the quasi-accumulation of VAT, Leonid Tulush said.

Thus, in 2017, the production of poultry products, unlike other types of agricultural products, was supported in two directions - in the form of a budget subsidy in the form of quasi-accumulation of VAT and by providing budgetary VAT refunds for the export of poultry products. The total resource of support amounted to more than 3.6 billion USD. At the same time, production of other types of agricultural products was stimulated only through budgetary subsidies, the expert stressed.

In 2018, when forming the procedures for using budgetary funds, first of all, under the budget program "State Support to the Livestock Sector," which concentrates almost two-thirds of UAH 4 billion from UAH 6.3 billion of support resources, it is necessary to ensure a more even distribution of resources budget support between agricultural sectors and agribusiness entities, Leonid Tulush summed up.