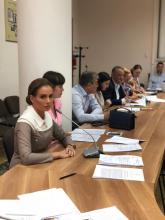 On August 28, 2018 the first meeting of the Working Group on Export Promotion of the International Trade Council took place, in which the head of the Ukrainian Stock Breeders Association and a public figure Iryna Palamar, participated as a member of this working group.

The meeting approved the leadership of the above-mentioned Working Group, in particular, the People's Deputy of Ukraine Vladyslav Danilin was elected its head.

Also, the activity plan of this Working Group was considered and approved for the next year at the meeting.

"One of the priority activities of our Ukrainian Stock Breeders Association is the development of international trade and economic activities of national agricultural producers, establishment of cooperation with interested international partners, working on opening new sales markets, improving legislation and eliminating internal state deficiencies faced by Ukrainian farmers," Iryna Palamar said. - Earlier we developed a number of our proposals on these issues, which today were taken as a basis and included in the Activity Plan of the Working Group on Export Promotion of the Council of International Trade."