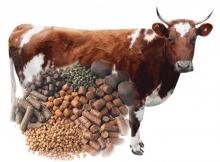 At the end of October 2017, a fire broke out in Germany during the launch of the BASF plant in Ludwigshafen, which caused the plant to be shut down.

Currently, the plants for the production of vitamins A and E BASF are also closed for planned and technical works. The company will be able to restart these plants only after it rebuilds a new plant in Ludwigshafen, then vitamin A and E will become available.

As previously was stated by BASF, it would take several weeks to restore the plants. However, today it is already clear that the recovery will take at least 2-3 months.

In this regard, manufacturers today have faced a significant rise in price of vitamins A and E.

As a result, a rise in the price of fodder products is expected to entail an increase in the cost of all livestock products: meat, milk and eggs.

"The emergency situation at the plant for the production of vitamins will further affect their cost, the growth of which has been observed for the past two months, it is associated with a general deficit of vitamins on the market," comments the head of the business direction "Poultry" of the GC "AgroVet Atlantik" Oleh Osipenko. - In particular, since September 2017, vitamin A in Ukraine has already risen from 42 euros to 350-400 euros (as of December 1, 2017), and vitamin E - 5 euros to 21-22 euros. All this will lead to an increase in the cost of feed for broilers by 1.9-2%, respectively, to an increase in the cost of 1 kg of broiler meat by 1.7 - 1.9% and an increase in the cost of eggs by 0.8-1.2%.
The cost of feed for turkeys  will increase by 2-2.8%, and the cost of meat will increase by 2-2.5%. However, how this will affect the price of selling poultry meat to the consumer is still unknown. "