The FAO Food Price Index remains at a stable level

The FAO Food Price Index is an indicator of the change in the international price of a basket of food commodities per month.

It is calculated based on average values of price indices for five commodity groups - cereals, vegetable oils, dairy products, meat and sugar, which are estimated taking into account the average share of each group in exports in 2002-2004.

This is reported by http://agronews.ua

On February 1, the next update of the indexes was released.

In January 2018, the average value of the FAO Food Price Index was 169.5 points, virtually unchanged from the level of December 2017.

At the same time, the value of the index was almost 3% lower than the corresponding indicator of the previous year. Prices for cereals and vegetable oils slightly strengthened in January, the cost of dairy products and sugar as a whole declined, while meat quotes remained unchanged.

In January, the average value of the FAO Price Index for cereals was 156.2 points, almost 2.5% (4 points) higher than the December index and 6.3% higher than in January 2017. Despite the availability of sufficient reserves, wheat and corn prices went up due to the weakening of the US dollar rate and concerns related to weather conditions. International rice prices continued to strengthen in January, mainly due to increased demand in Asia.

The average value of FAO vegetable oil prices in January was 163.1 points, practically unchanged from the level of December: moderate prices for palm oil were offset by lower quotations of other types of oils, primarily sunflower and rapeseed oil. International quotes of palm oil rose in connection with the activation of import demand in anticipation of a seasonal decline in production in South-East Asia. Reduced prices for rapeseed oil are associated with both excessive supply in the EU and a higher than expected level of reserves in North America and Australia, while a decrease in sunflower oil quotations resulted from sluggish import demand in the world.

The average value of the FAO price index for dairy products in January amounted to 179.9 points, which is 2.4% (4.5 points) lower than the level of December 2017. Despite the fact that the decline in the value of this index continues for the fourth month in a row, it still 41% higher than the minimum level reached in April 2016. For a month, the international quotes of butter and cheese have gone down, and the prices for milk powder have increased. The excessive supply of milk in the Northern Hemisphere and Australia has become one of the factors that largely influenced international prices for dairy products, including butter and cheese. At the same time, the price of whole milk powder increased due to a larger seasonal decline in milk production, which is expected in New Zealand. Prices for skimmed milk powder also increased, mainly as a result of active import demand.

The average value of the FAO price index for meat in January was 170.6 points, practically unchanged from the December level. Thus, the value of the index is 7.4% higher than in January 2017, but 19.5% below its peak in August 2014. International quotations of poultry and pork continued to decline due to the presence of a significant export offer with low import demand. The prices for beef have grown slightly, which is due to a decrease in supply in Oceania. At the same time, the prices for lamb grow under the influence of active international demand, especially in Asia and the Middle East.

The average value of FAO sugar prices in January was almost 201 points, which is 1.6% (3.2 points) lower than the December index and by as much as 30.4% lower than the corresponding period of the previous year. International sugar quotations continue to decline, mainly due to the high yield of sugar in the main producing countries and excessive export supply. 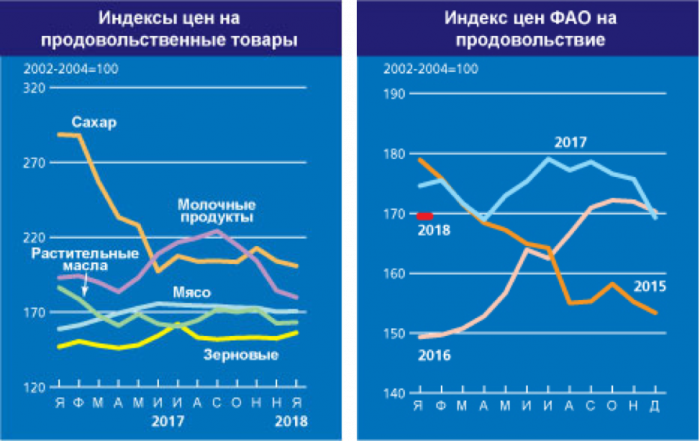