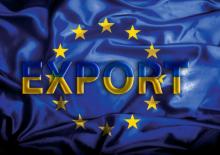 In January-April of 2018 exports to the EU increased by 26.6%, compared to the same period last year, and is $ 6.6 billion, according to the website of the State Statistics Service of Ukraine, agropolit.com reported.

The report says that the volume of exports of goods to the European Union in the first half of the year amounted to $6.6 billion or 42.9% of total exports. It increased compared to January-April of 2017 by almost $ 1.4 billion or 26.6%.

The largest exports to the EU countries were the products of the agro-industrial complex and food industry - 27.8% of the total exports, base metals and products made of them - 23.3%, mechanical and electrical machines - 14.8%, mineral products - 13.9 %.

The most significant export supplies were made to Poland, Italy, Germany and Hungary. Among the other countries in the world, most of the goods were exported to the Russian Federation, Turkey, India, Egypt and China.

The share of ferrous metals, electric cars, wood and wood products increased in the total volume of exports of goods in comparison with January-April of 2017. However, the share of cereal crops, fats and oils of animal or vegetable origin, ores, slag and ash, seeds and fruits of oilseeds decreased.