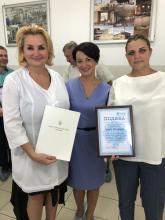 The owners of the enterprise expressed their official gratitude to Iryna Palamar, head of the Ukrainian Stock Breeders Association and a public figure, for her active position in protecting the legitimate rights and interests of the company "Econia" during the illegal takeover.

Deputy Minister of Justice for State Registration Olena Sukmanova arrived at the enterprise and handed over to the enterprise "Econia" Iryna Varahash the order that confirms canceling the transfer of property rights to other persons.

It bears reminding that  the Anti-Illegal Takeover Commission of the Ministry of Justice granted the complaint of the company "Econia" and canceled illegal registration actions, which led to the loss of real estate.

The head of the USBA Iryna Palamar actively acted in defense of the enterprise: she appealed to the relevant authorities of the Ministry of Justice of Ukraine, to the office of the Business Ombudsman as the representative of the European Union for the protection of business rights and other organizations, to the first vice-prime minister - the Minister of Economic Development and Trade of Ukraine, Stepan Kubiv, who is the head of the Interdepartmental commission on the protection of investors' rights, combating the illegal takeover and seizure of enterprises, demanding urgent measures to restore the rights to illegally seized property of the company "Econia", to cancel illegal registration actions with property. She also went to the scene of the incident, to Zolotonosha, to intervene in the situation personally.

Also, within the framework of the event, the guests had a tour around the company, where the they could see its capacities and conditions on which the products are manufactured.