Development of state subsidies for livestock is negligible because of the shortcomings of this program, as we predicted - the head of the USBA, Iryna Palamar 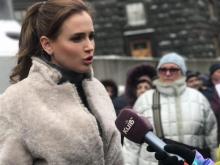 The Ukrainian Stock Breeders Association continues to analyze how agro-subsidies are developed in 2018. This time we will talk about livestock subsidies.

It bears reminding that in 2018, in general, 4 billion UAH were allocated to support livestock. However, according to the Ministry of Agrarian Policy and Information, in response to the USBA request No. 253/09 of 27.09.2018, of October 1, 2018, the State Program for the Livestock Sector has been adopted by the KVPVK 2801540 budget program for the amount of 694,313.3 thousand UAH, of which 685 031.2 thousand UAH to recipients of state support, that is, it is only 17.1% of the total amount envisaged in the state budget for livestock.

In total, this item of expenditure 200 million UAH are planned to be allocated in the state budget. That is, only 0.5% of the stipulated amount of expenses was spent!

And in general, this area provides 1 billion 100 million UAH. That is, less than 0.5% of the planned amount was used.

In general, it is planned to support this area in the amount of 500 million UAH. Thus, about 52% of the planned amount was disbursed.

The total amount of the planned funds for this item of expenditure is 700 million UAH.

Thus, 20.6% of the provided subsidies were directed.

The total amount of expenses envisaged is 1 billion 200 million UAH.

That we have, just a little more than 18% of directed funds.

Note: however, today, as it became known from the media, a large amount of funds has already been used under this budget line, in particular, Vinnytsia Poultry Factory received another 618,800,000 UAH.

The total amount of subsidies provided in this area is 300 million UAH.

Thus, only 18.4% of the planned amount was directed.

“As we can see, with the exception of state subsidies for the keeping of cows, which have been used by more than half of the stipulated amount, in other areas of supporting livestock raising, the amount of state subsidies is very small, and sometimes it is very miserable, says the head of the USBA Iryna Palamar. - Why did it happen? The answer is obvious, and we talked about this at the end of 2017 and at the beginning of this year, when directions of financial support for livestock were determined and mechanisms for its use were prescribed at the state level.

The procedure for using funds provided in the state budget to support the livestock industry (Resolution of the Cabinet of Ministers of February 7, 2018 No. 107) was written, in fact, behind the door. Representatives of the Ministry of Agrarian Policy directed the funds themselves, not taking into account the positions of livestock breeders and specialized public associations protecting them the rights. As a result, in addition, the scheme of using state subsidies is not transparent, it has a number of shortcomings, which we also talked about and warned at the working meetings at the Ministry of Agrarian Policy, at the Agrarian Assembly and at the All-Ukrainian protest of breeders who gathered to oppose such not transparent schemes. We also covered this issue in an open letter to the Prime Minister, Volodymyr Groisman, in numerous publications and pointed out in letters to relevant bodies. Nevertheless, all this was not taken into account.”

If we talk in more detail about the imperfection of the program “State support for the livestock industry”, then, according to the experts of the USBA, besides the fact that the procedure for using these funds was adopted with a violation of legal requirements, the low percentage of funds was associated with the following factors.

The main reason is that the proposed mechanisms for state support of animal husbandry are very complex, or contain quite a few bureaucratic moments.

“A simple example, in the direction of “partial reimbursement of the cost of bull semen,” which was delivered in import mode, a business entity must submit a set of documents to the Ministry of Agrarian Policy Commission, comments the head of the USBA. - However, livestock farmers themselves do not import, as a rule, semen doses, but buy them from distributors of international companies that import them themselves. Accordingly, the farm objectively does not have the necessary package of documents and cannot apply for this subsidy. The idea of ​​support was good, but the mechanism was not written out deliberately, without a qualified study of this market sector.

Also, our Ukrainian Stock Breeders Association insisted on simplifying the obtaining of permits and coordinating project documentation for the construction and reconstruction of livestock farms and complexes, in order to receive subsidies in the direction of “partial reimbursement of the cost of objects”. On the other hand, as an alternative, they suggested that enrollment of the findings of a feasibility study instead of design estimates, for which you need to go through more than one bureaucratic circle. Therefore, only 5 companies received this subsidy. In fact, in Ukraine, livestock farms and complexes are being built and reconstructed, but according to certain requirements they cannot take advantage of this subsidy.

We also insisted on supporting the construction or reconstruction of enterprises of the infrastructure of livestock farms.

Another reason noted by the experts of the Association is the insufficient study and consideration of the real needs of the livestock business.

“For example, we insisted on supporting the pig-breeding industry - subsidizing pork producers for 2 UAH per kilogram of live weight, due to losses caused by ASF, lower livestock, growth in imports of pork to Ukraine. But, the pig industry was not subsidized in any way in 2018.

We also proposed to provide such a direction of support as compensation of interest on loans for working capital of existing enterprises of industrial pig breeding and cattle breeding.

Speaking about the support of industrial cattle breeding, we talked about a very small amount of subsidies for keepers of cows - 1500 UAH. Therefore, it so happened that the farms do not have an interest in part to collect document folders in order to receive a total of UAH 1500 per cow,” comments the head of the USBA.

Another reason is the lack of transparency of state support for the livestock industry and the insufficient involvement of the public in control over the use of funds.

Thus, the legislation provides for the possibility of participation of public associations in the work of the Commission of the Ministry of Agrarian Policy to provide state support for the livestock industry. This is paragraph 5 of the Regulations approved by the Order of the Ministry of Agrarian Policy No. 148. The Ukrainian Stock Breeders Association appealed with a corresponding letter on April 11, 2018 about its inclusion in the composition of such a commission. However, this request was ignored.

Although the Ukrainian Stock Breeders Association initially insisted that the mechanisms operate to the maximum without the participation of commissions, and if they do, the public should participate in the composition of the commissions.

In addition, among the reasons for the low percentage of development of state subsidies in animal husbandry for 2018, experts from the USBA mention insufficient awareness of such state support.

“The phone lines of the Association are ringing off the hook for the whole year,” says Iryna Palamar. - Livestock breeders are interested in government support, where to go and what documents to submit, which banks are lending, and so on. We also repeatedly conducted surveys that indicate that a significant percentage of livestock producers know about such state support only in general, or do not know at all.”