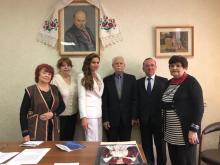 On February 15, 2018 the chairman of the Ukrainian Stock Breeders Association Iryna Palamar, at the invitation of the Ambassador Extraordinary and Plenipotentiary of Uzbekistan Mr. Alisher Khabibullaiovych Abdualiiev, held a meeting with representatives of the Ukrainian diaspora in Uzbekistan.

Ukrainians, who have been living in Uzbekistan for many years, welcomed their fellow countrymen, told about the peculiarities of life in the country, discussed the possibilities for further support of interrelations. After all, in the near future, the relations between the two countries will only grow stronger, and the development of business partnership in the direction of animal husbandry, which is actively promoted by the Ukrainian Stock Breeders Association, is playing an important role in this.

"I was very impressed by the warm and homey atmosphere that prevailed in these walls," writes Iryna Palamar, chairman of the USBA, on her Facebook page. - Portraits of Taras Shevchenko, Lesia Ukrainka. Homemade sweets and pastries. Chairman of the Ukrainian Diaspora, Yurii Boiko, held a warm and family reception. I gave him our calendar, and he presented me a book about famous Ukrainians in Uzbekistan. It was in the family way. Then the Ukrainian song was sounded. Honestly, I did not want to leave. "

It bears reminding that now there is a business trip to the Republic of Uzbekistan of the Ukrainian delegation, organized by the USBA at the invitation of the Ambassador Extraordinary and Plenipotentiary of Uzbekistan to Ukraine, Mr. Alisher Khabibullaiovych Abdualiiev. On the eve of the meeting, the head of theUSBA has already met with the Deputy Minister of Agrarian Policy Mustafaiev Otabek Sadykovych and the Head of the International Relations Department Tolibov Shokhrukh, as well as the Governor of the Tashkent Region - Ibrahimov Hulomdzhan Inamovych and his deputy who is responsible for the development of the regions - Kasymov Elzod Ablakhatovych, where the parties discussed cooperation in livestock breeding and the development of breeding and genetics, the construction of high-tech livestock complexes.