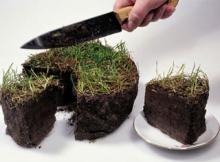 The bill on the turnover of agricultural land, the adoption of which is necessary for the introduction of the land market in Ukraine, will be submitted to the parliament in February-March next year, said the president of the Ukrainian Agrarian Confederation (UAC), People’s Deputy Leonid Kozachenko

"We are all ready to put this issue at the next session (the land market - ed.) To the parliament, agreed on almost all the main issues, most of the representatives of the public and the deputies support these proposals," said he during the Ukrainian Business Forum in Kiev on Tuesday.

According to the deputy, the prepared document gives the first-priority right to purchase the land to a farmer who works in the region where the site is located. In this case, the sale of land to foreigners will be banned for at least 5 years.

L.Kozachenko specified that, as it was supposed earlier, the bill will provide for restrictions on the concentration of land in one hand at a rate of 200 hectares. At the same time, he noted that the question of how long it will be possible to resell land after its purchase is still being discussed.

As reported, the Verkhovna Rada in late October 2016 extended the moratorium on the sale of agricultural land, introduced in 2002, until 2018. Parliament also instructed its committees and the profile ministry to draft the necessary bills within six months.

The government planned to register a draft law on the land market in the autumn of this year. But so far the government bill has not been submitted to the parliament.

Earlier, the Cabinet proposed to launch the market concept, provides for the first stage of the reform the possibility of acquiring 200 hectares for individuals-Ukrainian. It was also proposed to introduce a discriminatory tax on the resale of land (50% of the sale of a land plot), which is resold less than 3 years after the purchase.