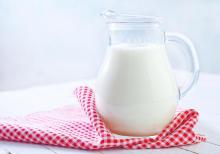 FAO expert Andrii Yarmak traditionally summed up the results of the Ukrainian dairy index over the past year.

This is reported by agronews.ua.

"Plus 32.5% - that's exactly how it was with the income from milk production in 2017 in relation to 2016 in those professional producers whose production efficiency remained at the level of the previous year. Those who improved efficiency have to add to this profit yet and those percentages.

What does it mean? This means that the average effective producer of milk, who has 500 animal units, received an additional 2-3 million UAH of profit over 2017. By the way, Astarta reports on the increase in income from milk by 35% that is almost a coincidence with our index.

We have returned to the level of conditional profitability of production by 2014. However, efficiency over this period has increased substantially in most enterprises. Therefore, we can safely say that 2017 was the most profitable for the last 5 years for dairymen, "- says Andrii Yarmak.

According to him, this was the most stable year in the history of Ukraine's dairy industry. The total amount of absolute fluctuations of UDI for the year was 46%. In other words, the profitability of the industry fluctuated 2.1 times less than just a year ago. Nothing like this has ever happened in the history of the Ukrainian dairy business.

"Therefore, the professionalism of our dairy cattle breeding is growing, the seasonality of price fluctuations is declining, and this is very good, because we all strive for predictability and stability, so a fixed price for milk per year is already possible and not so distant a prospect," - stresses the expert.

According to him, there are a lot of new projects in dairy cattle breeding. Virtually all effective manufacturers expand production. And these success stories do not let their neighbors sleep peacefully, many of whom also decided to modernize dairy farms.

"A significant indicator of the development of professional milk production in Ukraine, personally for me, is a significant increase in demand for skilled workers in the industry. "In early 2017, veterinarians with salaries at the level of 4-5 thousand UAH per month worked in dairy farms in Ukraine, but today it is very difficult to find veterinarian who agree to work with salary lower that 8-10 thousand UAH.

Accordingly, the production of milk in professional farms, according to our preliminary estimates, will grow quite dramatically as early as 2018.

At the same time, producers continue to be a weak link in the milk chain, which, nevertheless, begins to come to life.
In addition, the world market, meanwhile, after several months of downward movement, has stabilized a little.

Analysts disagree in the forecasts - they say that prices will fall, and someone claims that they will grow. And there are no exact predictions in principle. Therefore, we need to focus on what we have in Ukraine.

And we have the following.

a) Firstly, an increase in the supply of quality milk from professional farms;

b) Secondly, the cheapening of milk from households due to the potential withdrawal of second-class milk from official processing does not at all mean that this milk will not be recycled. In fact, leading processors have not taken it for a long time, and those who took it, as well as "shadow" processors, as they took it, they will continue take this milk, it will cost them less. It already costs less, by the way.

c) And third, too slow increase in the efficiency of milk processing in Ukraine and too weak work to promote the export of dairy products in comparison with the development of production

Therefore, if the world market does not support us, the income of milk producers in 2018, with a high probability, will decrease. I think that we should expect a 10% decrease in UDI. Therefore, those who want to earn the same amount of money as this year, it is worth looking for ways to increase efficiency by about 10%. For most manufacturers, and continue to milk obscene 4-5-6 tons per cow per year, it is quite possible. Of course, if there is a desire, "- says Andrii Yarmak.