Analysis of the beef market in Ukraine

Beef takes the third place among the production of the main types of meat in Ukraine. Poultry meat is produced most of all in our country. The production of domestic poultry farms is in demand both on the domestic and international markets. Ukrainian pork almost completely provides the domestic market. Its export potential is limited due to the spread of ASF. Beef is the most expensive and laborious kind of meat. In 2017 it occupied only 5.2% of the Ukrainian meat output, pro-consulting.ua reported.

Low purchasing power of Ukrainians in recent years has caused the reorientation of most buyers for poultry meat. Demand for beef in the domestic market has fallen, and domestic owners of cattle prefer to focus on the production of milk, and the bulls that are born are not fattened, but immediately allowed to be slaughtered. This leads to a gradual decrease in the number of cattle in the country. 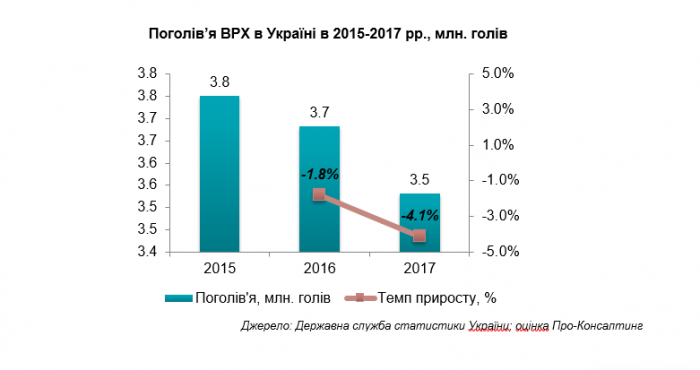 Last year, the production of Ukrainian beef decreased by 6.6% compared with 2016. A year earlier its growth was 8.6%, but it was not possible to achieve the 2013 indicators. The freezing technology is still not very common among producers - 78.5% of beef was released last year in fresh form. Domestic producers provided 96.8% of the domestic market in 2017. The share of imports increased over the year from 2.5% to 3.2%. In general premium beef varieties are imported for retail and restaurants.

The majority of production capacities are concentrated in the western regions of Ukraine. Favorable climate, accessibility of forages and the presence of extensive pastures contributed to the fact that the industry leader was the Ternopil region. It produces 22.6% of fresh and 30.1% of frozen beef from the total Ukrainian volume. 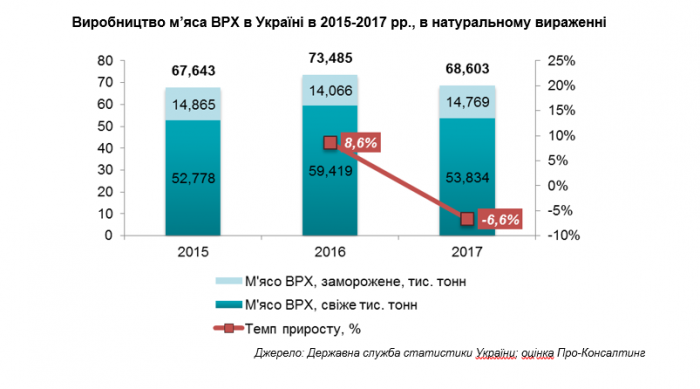 Booster for the development of the production of Ukrainian beef in conditions of low domestic demand is the discovery of new and expansion of existing channels for its export. The volume of supplies to international markets is 30-40 thousand tons per year and the prospects for growth in this direction are significant. Countries in Asia and the Middle East are ready to purchase large amounts of halal product.

To realize the export potential, domestic producers need to adapt their production to international requirements. We are talking about improving the quality and depth of meat processing, because its transportation over long distances is possible only in frozen form. It is important to carry out measures both at the state level and at the level of individual farms to prevent the spread of dangerous animal diseases, such as spongiform encephalopathy of cattle. Recognition of Ukraine as a country with a controlled risk of diseases will promote better promotion of our beef in foreign markets. In 2017, for these purposes, more than 3.5 million UAH were allocated from the state budget.

According to the results of the beef market research, it can be concluded that in the near future the reduction of domestic demand will be compensated by the expansion of export supplies. The key to successful development for domestic producers is the development of methods for processing beef that provide modern quality standards.