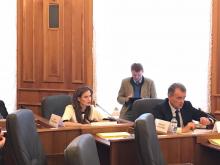 The Ukrainian Stock Breeders Association represented by its Chairman Iryna Palamar supports both bills No. 6355 and No. 6355-1 and believes that the position of both bills can be combined in one common.

On November 14, 2017, the chairman of the Ukrainian Stock Breeders Association Iryna Palamar took part in the meeting of the Verkhovna Rada Committee on Agrarian Policy and Land Relations, where, among other issues, the draft Law of Ukraine "On Amendments to the Law of Ukraine" On the Specifics of Insurance of Agricultural Products with the State support ", submitted by people's deputies of Ukraine Rybak I.P., Timish H.I., Liushniak M.V., Kot A.B. (register No. 6355 of 12.04.2017), as well as an alternative draft of the Law of Ukraine "On State Support of Agricultural Insurance", submitted by the People's Deputy of Ukraine to him F.F. (Register No. 6355-1 dated April 26, 2017).

These bills received a lively discussion. People's Deputy of Ukraine Mykola Liushniak, as one of the authors of the bill No. 6355, refused his bill in favor of supporting alternative project No. 6355-1. Some people's deputies of Ukraine, overall supporting the idea of developing agricultural insurance, opposed the proposal of bill No. 6355 in the amount of exactly 50% of the state subsidy for partial payment of the insurance payment accrued under the agricultural insurance contract, as too great.

Although attended by representatives of insurance companies expressed support for the majority of the bill No. 6355 (People’s Deputy of Ukraine Lushnyak). Later, the positions of people's deputies sounded about the need to support both bills and the development of a common one. The final decision on the draft laws was postponed to the next meeting of the committee.

The Ukrainian Stock Breeders Association represented by its Chairman Iryna Palamar supports both bills No. 6355 and No. 6355-1 and believes that the position of both bills can be combined in one common.

"Each of the bills, and most importantly, for agricultural producers, including many members of the Ukrainian Stock Breeders Association, aims to improve agricultural insurance with government support to increase the share of such insurance, which today is quite low," comments Iryna Palamar . "And we insist that the state should actively take on some of the financial burden on agricultural products insurance, so objectively, that agricultural activity is risky, depends on natural and climatic conditions and requires financial support."

Also the head of the USBA believes that both bills are common in the vision of state financial support for agricultural insurance by paying the state part of the insurance payment and in the form of a subsidy.
Even in the issue of the Agricultural Insurance Pool of Ukraine, both bills are very close - everyone notes its low efficiency, so the bill No. 6355-1 generally offers to abandon it, and No. 6355 - to provide for the voluntary participation of insurers in it.

Although, of course, bill No. 6355 contains more proposals for improving state financial support for agricultural insurance, which is proposed:

The content of the bill is reduced to two key things: the taxation of fuel for water transport excise duty at zero rate and the cancellation of rent for special use of surface water by water.
The Ukrainian Stock Breeders Association supports the idea of draft law No. 6735 on the restoration of the shipbuilding industry.

"Transport infrastructure is one of the factors determining the efficiency of the agrarian sector," says Iryna Palamar. - Mykolaiv is the epicenter for the export of Ukrainian agricultural sector products, a city where an important seaport is located for the Ukrainian economy, which allows Ukrainian goods to be transported to the most remote corners of the world. However, the quality of roads leading to this city is in an extremely negative state, fuel prices are rising daily. "
The Ukrainian Stock Breeders Association believes that the restoration of inland navigation can be a successful alternative for the logistics of our products. As they say in the Explanatory Note to the bill, the transportation of 1 ton of cargo by river transport provides for expenses of 3.78 kg less than similar expenses of motor transport. This means a significant reduction in the cost of transportation of agricultural goods and an incentive for the export of our products.

Agricultural producers who are geographically comfortable to use river transport should obtain a transport alternative to delivering products to seaports than land transport.

In addition to the above bills, the meeting also discussed the results of the Audit Chamber's audit of the effectiveness of the use of state budget funds aimed at developing the fishery in 2015-2016, as well as the draft Law of Ukraine "On Amendments to the Law of Ukraine" On Plant Quarantine " moving through the customs border of wooden packaging material ", submitted by the people's deputy of Ukraine Dovhyi O.S. (Register No. 6486 of May 23, 2017).