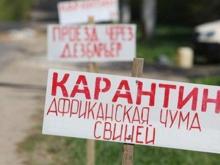 In the first week of September, on the farm " Pelekhiv-Ahro" in the Pelekhiv village (Poltava region) due to the African swine fever (ASF) all the livestock - 5126 pigs were burned, 400 of them were sows.

This is written by Gazeta.ua.

In the morning, veterinarians came to the traditional review. In the shed lay six dead pigs. An autopsy showed a plague. In the evening the animals began to fall massively. We created several groups for destruction. Specialists put to sleep, the workers carried in a pit, threw up firewood. It lasted five days. We have strict rules for working clothes care and equipment servicing. Trucks are disinfected. Perhaps the plague came with air. Recently, there was an outbreak in the neighboring village, the owner of the farm Iryna Nesterenko has said.

"Plekhov-Agro" has existed for 10 years. 27 workers work there. In the near future, some will be fired.
For a week we lost millions of UAH. However, I will not give up. I will restore the enterprise no matter what. At first, I need a million UAH for a test stock. One sow costs 10 thousand UAH. Every pig that is born on the farm needs blood test that costs 2,5 thousand UAH. I do not want to get into loans. I hope the state will pay compensation, Nesterenko has noted.

When it became known that farm was in trouble,  the representatives of the veterinary service, the sanitation station, the State Service of Ukraine for Food Safety and Consumer Protection immediately came in the village. Quarantine was announced within a radius of 3 km. They visited people. They said they would take the pigs. Those who had time could slaughter their livestock. There are two dozen piglets left up to 30 kg. People worried because they kept pigs for money, the village chairman of Pelekhov Serhii Taran has said.

It bears reminding that as of September 1 of this year, compared to the same date in 2016 in Ukraine, the population of pigs dropped to 9.8% - to 6.8 million animal units.