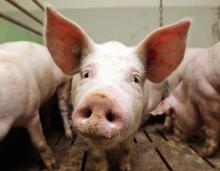 Since January 1 of this year, Ukraine has recorded 27 outbreaks of African swine fever (ASF).

This was reported in the State Service for Food Safety and Consumer Protection. "As of February 5, 2018 in Ukraine, registered 27 cases of African swine fever," – is said in the department.

According to experts, ASF prevented Ukraine from earning an additional $ 12 million to export pork. And the losses from the disease exceed already 1 billion UAH. The inability of the authorities to respond effectively to the spread of the disease has led to a significant rise in the cost of pork and fat, experts say.

According to the People's Deputy Serhii Tryhubenko, the lack of professional staff and inefficient use of budget funds hamper the resolution of ASF to authorized bodies.